Connect to LA with MyFig 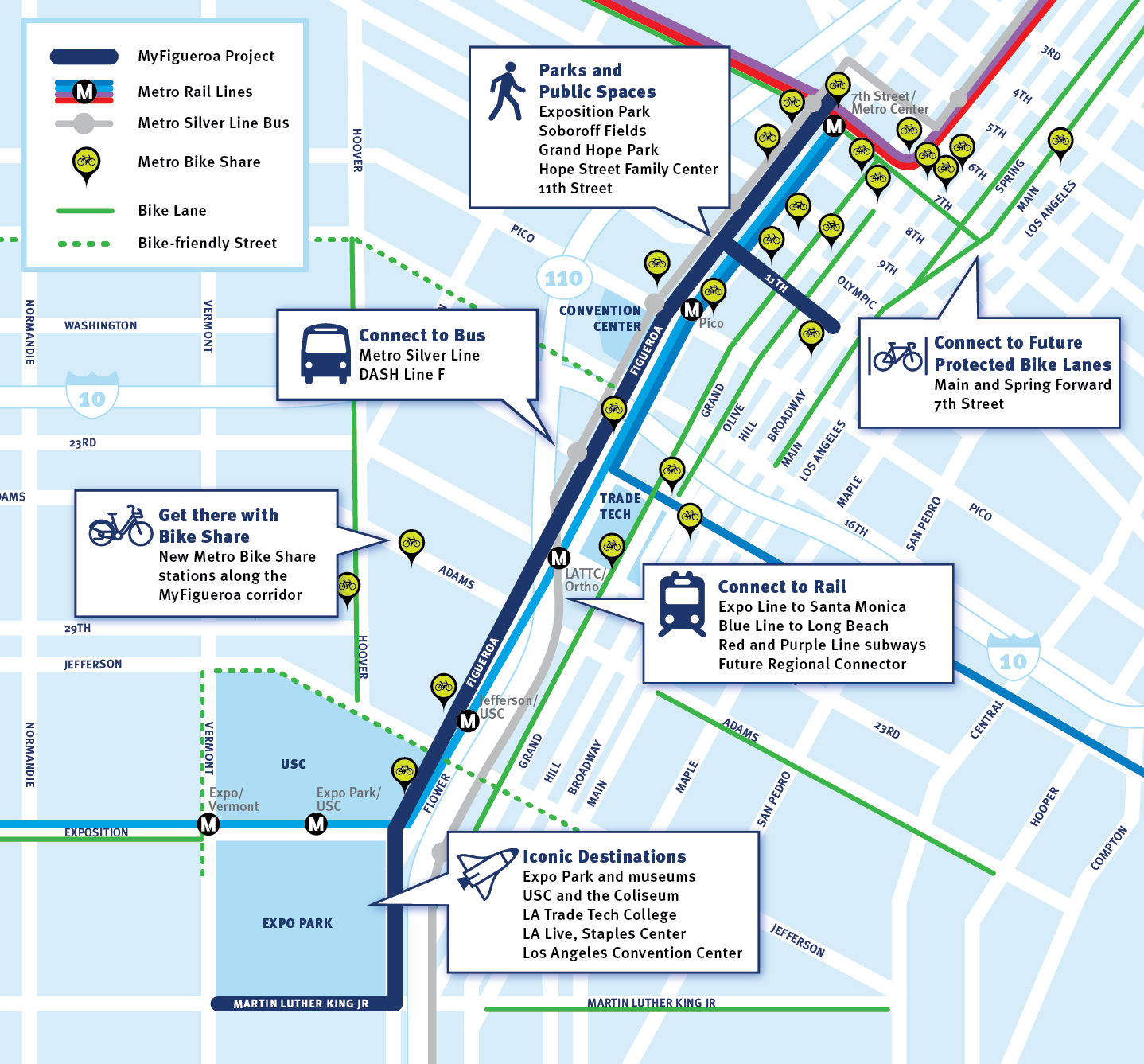 MyFigueroa is an important piece of infrastructure that is connecting many existing and planned transit options, bike facilities, and iconic destinations. As construction nears completion, we're highlighting the connections that MyFigueroa will provide within the urban fabric of Los Angeles.

MyFig is the first of several protected bike lanes in the works in downtown, including parking protected lanes on Spring St and Main St ( Main and Spring Forward). On its northern end, MyFig also connects with the bike lanes running east/west on 7th St.

MyFigueroa is right in the confluence of Metro's expanding rail system. Running alongside the Metro Expo Line (which now connects downtown LA to Santa Monica), MyFig passes several Expo Line stations, including 7th Street Metro Center, where it also connects to the Blue Line to Long Beach, the Red and Purple Line subway lines, and the future Regional Connector (which will connect MyFig to Pasadena and East LA as well).

The Figueroa corridor is also home to a variety of bus services, and the new MyFig bus platforms will make riding the bus on Figueroa much more efficient, since buses will no longer have to pull in and out of traffic.

The Metro Silver Line runs through downtown LA on Figueroa, before taking commuters on the Metro ExpressLanes along the 110 freeway to San Pedro or along the I-10 freeway to El Monte.

The Los Angeles Department of Transportation's DASH line F also runs along Figueroa, with stops every couple blocks, providing an important connection between downtown and the University of Southern California.

From Exposition Park to Grand Hope Park at 9th Street, Figueroa connects a number of open spaces, including the park at Hope Street Family Center and Soboroff Sports Fields, which were funded as part of MyFigueroa's Prop 1C funding. The corridor is home to several outdoor shopping areas as well (such as 7th at Fig and The Bloc). And most significantly, MyFigueroa has brought wider sidewalks and landscaping to 11th Street in South Park, turning the street into a five-block linear green space.

MyFigueroa passes some of the most iconic LA destinations. Basketball fans and concert goers will now be able to bike or bus on MyFig to get to Staples Center or LA Live. USC students will now have an easy and safer route to bike from campus to restaurants in downtown or museums in Expo Park. And LA Convention Center visitors will also be able to use MyFigueroa to see more of what Los Angeles has to offer, throughout downtown and beyond.

On top of all of that, Metro Bike Share is expanding south along Figueroa, providing more options for people traveling on Fig. Now you can ride transit to work or school in the morning and hop on a bike share bike on the way home, connecting with the existing network of bike share stations throughout downtown LA.

All of these layers make MyFigueroa a vibrant corridor where people work, live, ride, shop, play, and run into friends on their way. The complexities of combining buses, light rail, bikeways, and event centers like stadiums and museums make it a place unlike any other in Los Angeles. LADOT has been working to balance the efficiency for all of MyFig's uses, while keeping in mind that it's not a major thoroughfare for those just passing through, but home to many destinations and a destination in itself.